Kristen of Motherhood Uncensored over the weekend.  I totally missed the deadline for this but I love Rebecca &
Kristen dearly, both being some of the first bloggers I read and having the  privilege to meet them in person more than once.  To celebrate the upcoming births, the shower hosts asked for stories reminiscing about those bygone first baby days.

There is nothing like watching a sleeping baby or cuddling them or their smell.  However, the thing I remember, the thing I miss... is how grounded you feel with a newborn, as if the weight of the baby in your arms connects you to the earth more firmly than you've ever been before.  Straight to the core.  Everything is heavy and warm, yet even at the darkest time of night there seemed to be light coming off this child and it fills you.  Somehow it fills you, this light and heaviness and warmth, being blanketed in baby until it's something that's a part of you.  A part that, no matter how sweaty or hot you actually get, you never want to take off.  Knowing that blanket will get lighter and lighter as your child grows up makes you appreciate that ground-ness more deeply.  You know every inch of your body and you know every inch of your child's body and it's simply an extension, his skin is your skin.  Everything that you've ever felt, your child will feel as well.

The schedule was constantly changing, I was tired and it was hard work in those early days, and yet I lived more in the moment than I ever had in my life.  I've heard it said that when a child is born, for the mother the whole world narrows to just mother and child.  But I didn't feel that way.  I felt like we were a mother and a child in the world.  Finally, in the world.  As big as it was, together.

Congratulations Rebecca and Kristen!  Enjoy sharing the world with your little ones.

Proof My Friends Are as Weird as I Am

Last weekend I threw a baby shower for some very good friends of mine. (I’ve been meaning to blog about this all week. Hee hee!) So my friend Winnie really detests baby showers. She hates the stupid games. She hates the hours of unwrapping gifts punctuated with a million, “Awww!”s. She kind of hates the whole she-bang. (Which I find ironic considering she has a pug blog. I keep waiting for the day she designs her own LOLpugs.) Winnie is the kind of gal to buy you an extra nice gift so she can get out of going to your horrid baby shower.

Of course, I jumped at the chance of throwing her a shower.  (Not that that’s a big stretch since I’m the unofficial event organizer of our group.) Winnie had some requests/ideas to make the shower less traditional, including, 1) coed (which we did); 2) no games (ditto – I think a lot of them are dumb, too); 3) pancake restaurant (rocking!); and 4) placenta recipe cards as part of the favors!  (Um, me and her other friend nixed that one.  Although potentially hilarious (because it was that kind of group), her mom was going to be there.)

But in that spirit these developed… 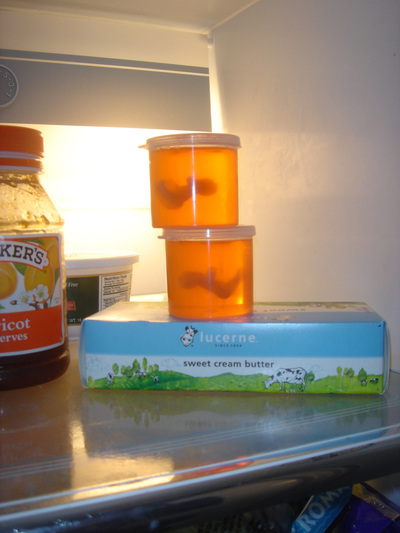 Yes, that is a baby in womb-like jello (mucho thanks to Penny!). Peach jello to be exact. Cherry and Strawberry were a tad too graphic. And I heard the peach jello was quite delicious, as folks dug into them after our meal. Here’s a closer look (because I know you want to). 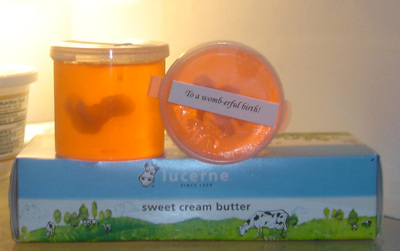 We also put together a baby survival kit (which included booze, of course) and had a lot of fun with graphics of sausage and waffles (she’s having a boy). So how did my friend Winnie, hater-of-showers, react to the end result?

Quote:  “That was the least insufferable shower I’ve ever been to!”

Posted by the weirdgirl at 02:52 PM in I love my friends, Parenthood - the other white meat | Permalink | Comments (9)