I've been working on some new projects, which is responsible for my terrible slackardly effort in posting.  (Also apologies to everyone I have not visited.)  One project in particular I'm pretty excited about.  It's a new website and, while it's not "ready" yet, it is live while I progress in building it.  Since Wednesday was my birthday (41! I know! I'm old!) and I really didn't have a whole lot going on special that day except work stuff I decided to give myself a birthday present and soft launch the new site.

It's called Cougar Beat and you can just go on and visit to see what it's all about. You may not all quite fit the demographic but I hope you see the fun in it as much I do. :)

I'm also still writing for Culture Brats which I love. I need to be better about re-posting links to the stories there because our group is really doing some cool stuff!  It's just gotten better the longer we've been at it.  And I love summers because I usually have more time, feel recharged, and there are a lot more events going on to see and write about.

What is this thing you call freedom?

I really should get off my ass because now that Chance is in school and they've extended the school day I've got SIX HOURS to myself!  There are fancy stores to visit, and cities, and activities I could do where it would be inappropriate to bring a child along. And before your heads drop too far into the gutter I'm talking poetry readings where I could listen without feeding my child video game cartridges and unendingly nudging him to hush.  I'm talking artsy stores where every single item (including the salespeople) are made up of glass, and not just regular glass made from desert sand, I mean fancy glass from Italy made from tiny ground-up glass elves. I'm talking exotic locales (i.e. local places of interest) where I could be eating something fruit inspired that is not remotely as healthy as eating actual fruit without sharing.  That's what I'm talking about.

And you know what I've done for the last three days while Chance is off scampering on the playground? I've fricking slept.  I've slept through my precious freedom hours and it is all Lady Gaga's fault.  I went to her concert Tuesday night (review at Culture Brats!) and somewhere between the crotch gyrating, heart eating, and the giant angler monster I got a cold!  A fucking cold!  While it's still warm out!  I just know those flaming boobs were spewing germs into the audience.  And the whole concert here she was inciting us to "set ourselves free".

Really, Ms. Gaga?  Because I can't be pretend fabulous with a cold.

Or, as one fellow parent, said to me yesterday, "What, you expect a life?!"

Posted by the weirdgirl at 05:05 PM in Culture Brats, Venting, Weblogs | Permalink | Comments (2)

Getting back on the horse

The problem with horses is... they move.

I was on a runaway horse once.  I was about five or so.  The farmer leading me, Queen of farm animals, and the horse dropped the lead for a minute, see.  The horse, recognizing the opportunity, weighed its options... run back to the farm for chow OR listen to an inexperienced girl child with high falutin' ideas about what she's capable of yanking on the reins.  Food won and in a split second the horse bolted through a fruit orchard with me on its back, pigtails a-flying.  (Mine, not the horses. Pigtails on a horse would just be silly.)

You know what?  Branches hurt.  After it was all over, it didn't occur to me to be afraid of horses.  Which means I'm either brave or stupid, your choice.

There's a life metaphor in there somewhere.

Anyway, I'm getting back on top.  (Heh. That's what she said!)  (Wait, that doesn't make sense because that is what I said.  hmmm)

Anyway redux, I've got a post on MC Hammer pants over at Culture Brats!  I know you all still wear them.  And I KNOW, I just know, that someone out there is going to tell me, "But they're so comfy!" and/or "You're just jealous that you can't wear them!"  Because every single time I do a post knocking fashion someone tells me I'm just jealous.

You know what I'm really jealous about?  I found these after I posted over at Culture Brats! 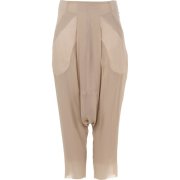 These must have belonged to a horse.

Posted by the weirdgirl at 11:14 AM in Culture Brats, Fashion Rules According to Me, Weblogs | Permalink | Comments (2)