This blog is not dead...

It's only been sleeping.  It's not like I didn't have anything to talk about, but I was sort of really tired of all I had to talk about.  You know?  But that's OK, it's time to wake up now.

We have been doing a major overhaul on our yard.  The problem with our yard is that our house is a hundred years old and the backyard has been ladscaped to death.  Literally.  There are spots where nothing would grow anymore.  I figured at some point treated wood had wreaked havoc with the soil.  And the last time previous owners had landscaped they had rendered everthing in shades of grey and brown and sort of woodland-like but reallly just kind of dead looking.  It was like a zombie forest back there, minus the moaning.  We also had either a ton of shade or the withering glare of too much sun.  So let me introduce you to our new artificial lawn!  (the crowd roars) 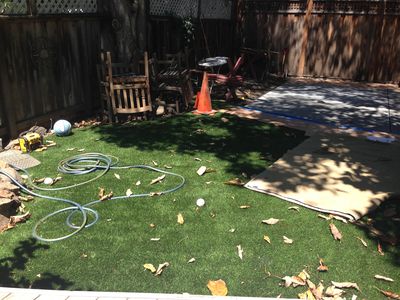 I'm horrible about before and after pictures but I'm GREAT at right in the middle pictures!  This is our new wonderful lawn, and behind it is a patch of nothing-will-grow dirt, and our ugly cement pad.  Why am I so excited about plastic grass?  Because IT IS AWESOME!  So much nicer than the roll out hurt-your-butt-when-you-sat-on-it turf carpet that I remember fed-up grown ups used in the 80s.  And you know, this is California and we're in a drought again.  And ALSO, most importantly, this... 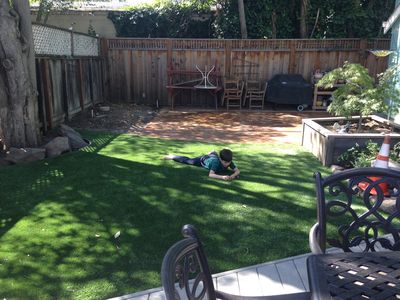 That patch was previously covered with flagstone.  No child could lie there and play with Legos.  Seeing Chance on the lawn was worth the purchase right there!  We also had the cement pad stained and it looks a million times better.  To the point of, people keep asking us when we put in the concrete!  (Le sigh, it's been there. It was just blaaaaaand.)

See the offending flagstone, accesory to ants. My dad is happy to take that off my hands, btw. 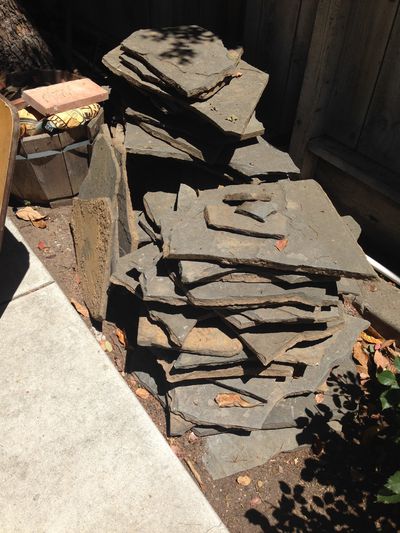 We've also been working on a million small projects while the garderners are transforming the space into a wonderland.  Keen wants an outdoor kitchen so he painted an old picnic table and added sheet metal on top to created a prep table. 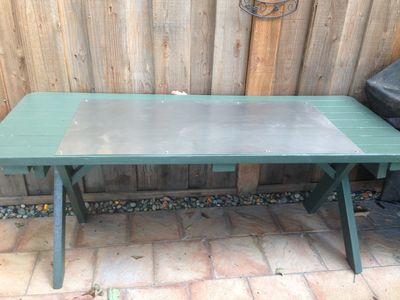 I've been painting a metal table set and a bunch of other outdoor items.  And because it's me it's totally bright colored. 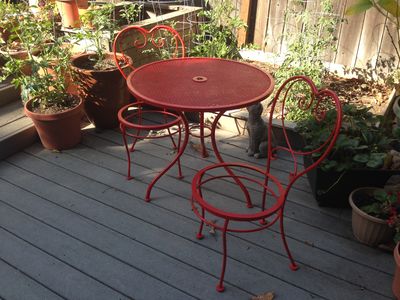 We're not done with everything yet, but we're getting there.  To be continued!