Home Archives Profile Subscribe
Do they have Rosetta Stone for that?
In the city things happen

Instead of a little brother, how about a snail?

School's out for summer! (I keep singing that and Chance has no frame of reference. Guess I need to play more Alice Cooper.) Chance's last day was last Thursday and May was absolutely packed with school events, last minute field trips, and productions. I also helped the librarian with the school's textbook inventory (4500 books! yikes!) so that took another chunk of time.  And a LOT of walking.  I think I was more ready for summer vacation than he was.

Naw, that's a lie. He was TOTALLY ready for summer. Sleep in! Sleep in!

Anywho, he's been on another kick of asking for babies, pets, and betas.  His best friend got a beta fish so he's dying to have his own, never mind that he already has two goldfish and an algae eater that, oh yeah, he never takes care of.  So the only word in my vocabulary right now is "no". It's very caveman-like, what with the grunting and the growls.

But he's also been into bug collecting.  Roly polies, ants, snails. I view that as science in action as long as they don't get loose in the house. I've been trying to work on self-sufficiency skills with Chance, such as, instead of asking mom a million questions about bugs that she doesn't know, utilizing his new reading and writing skills on the Internet to do research.

So what came up was the question... can regular garden snails be kept as pets?  You know what, they can! And I'm totally cool with that as his new pet!  We did some research and built a terrarium.

A seven dollar storage box from Target and a lot of drilled holes later. 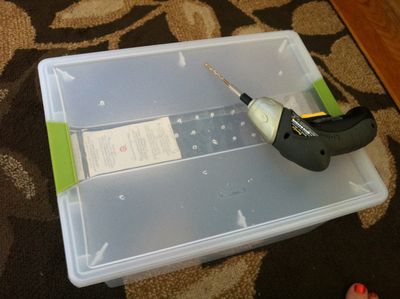 Add dirt, and compost or moss for moisture retention. 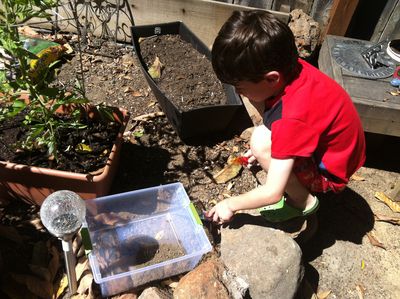 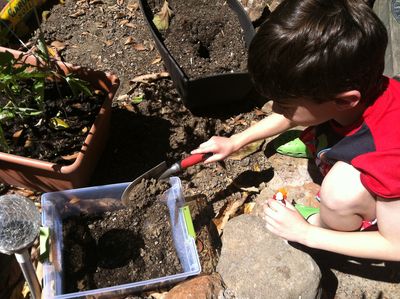 We learned that snails are social so it's best to keep two of them and to always give them a place to hide if they feel like it, like in an overturned pot. 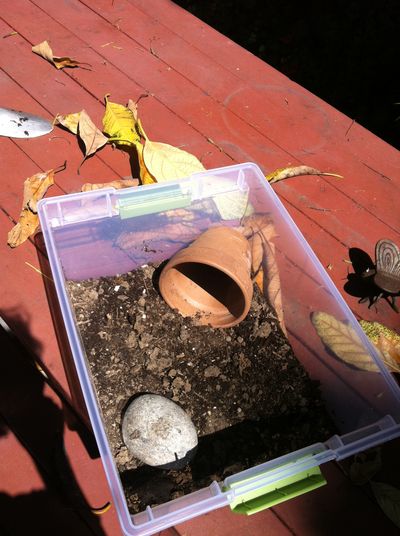 We found out what they ate and the best way to give them water. 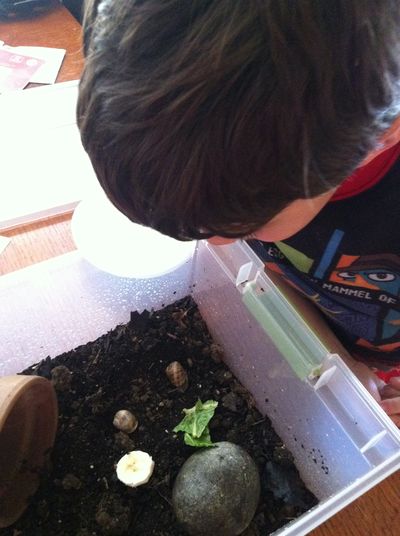 Get this... garden snails can live up to 15 years!  I know!  Let's see if these ones last the summer. 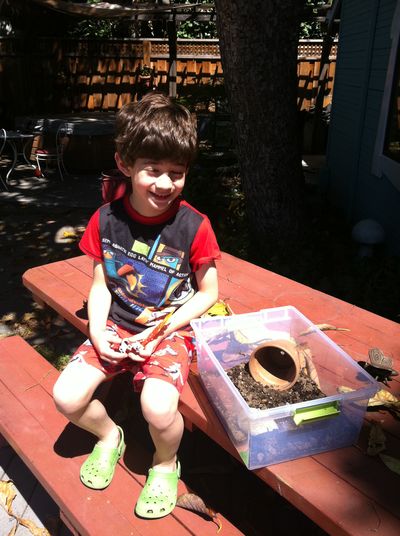 Summer science project complete! The best thing about this pet is we can run out to the garden for a new one if they kick it.  What?

Fifteen years?! Holy heaven! Another good thing? No pesky 'what the hell are you barking at now?!' like I'm dealing with with the dog we've had about a year. Seriously, this lovely hound barks at dust motes...and probably will for 15(plus) years.

We didn't really meet at the Hallmark thing, but I was there, crying with you. I wanted to point out that the hotel offered to give you a goldfish to have in your room during your stay. I thought your son might like to hear about that!

FADKOG - I would like to get a dog eventually, after our oldest cat passes. She's kind of a bitch to new animals. The barking isn't any fun but I think the free crumb vacuuming service sounds like heaven!

Rookie Mom - Sorry we didn't get a chance to meet in person. It was a fun/tearful event. We passed on the goldfish in our room (because darn it, I was on vacation), but my son definitely visited the front lobby's fish a lot this week!