You know what really chaps my hide?  So you know how I volunteer in the school library, right?  I put away books, do check in and check out, and generally straighten up.  Our librarian is only part time and the library is actually split between two buildings right now until they get the replacement building up from the fire, so it's really crucial to have parents help out.  So far I think there's maybe three of us.  Maybe.  Well, it's bad enough when the kids come in and flagrantly disregard the rules and make a big mess.  But then there are parents who come in who seem to be doing it too!  I mean, really?  Was that stack of books on the floor really there when you entered that aisle?  Did you just decide it would be a good idea to put every book backwards on the shelf?  It's a small library too, and I'm not really the patroling type but shit on a stick, I think I'm gonna have to.  I'm gonna have to be THAT library clerk.  And that just sucks.

Of course, I might be just extra tired this week.  It's not just the time change either. We had Chance's 7th birthday this last weekend!  I am amazed at how quickly time has gone by and how tall he's getting!!  *sniff*  He had a Pokemon theme since he's so grown up and mature now.  (ha!)  During the party we only had one vomiting incident and three pieces of cake on the floor!  One of those pieces of cake which I found still on a plate but in the very back of a closet with only the fondant eaten off.  That right there is a kid who doesn't get much sugar.  I bet he/she went back for a second piece of fondant, too.

I was extra clever this year (shut up) and hired an entertainment group to keep the kids occupied for most of the party. What you see below are the 40-year-old version of Ash and the 20-something version of Misty. (Those are main Pokemon characters, don't you know.) 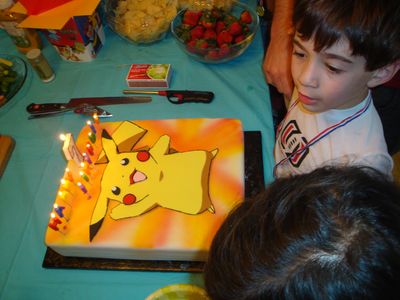 Unexpected comedy: listening to the kids shout out which piece of Pikachu they wanted to eat. "I want Pikachu's eye!" "Can I have his mouth?" "Gimme an ear, gimme an ear!"  Cannibals.  Don't you know Pikachu is your friend?! 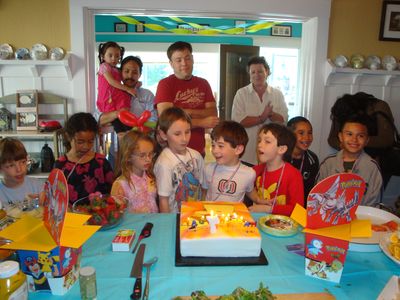 Then after the party was all said and done, everything cleaned up and a quiet Sunday, on Monday there was a teacher inservice day.  So three of us parents took a bunch of the kids to the zoo. Zoos are so cool. But there sure is a hell of a lot of walking.

And that is why I am cranky psycho book lady this week.

P.S. Oh my god! How awesome would it be to catch library helpers (or messy parents) in a poke ball and then release them when you needed help?! "I need you Dewey Decimal Lady! Now use sort and stack attack!" Ha ha! Gotta catch 'em all!

I guess that's only funny if you watch Pokemon.

Happy Birthday to Chance--he obviously had a great birthday party!

And I can definitely relate to your comments about working in a library: I worked at the public library here many years ago as a circulation clerk. And part of my job was re-shelving books. I was quite good at it, being very familiar with the Dewey Decimal System. But it was still quite bizarre, because obviously most of the adults (I didn't work in the children's section)were unfamiliar with it--or didn't care where they replaced books through which they'd browsed! There were many instances where stacks of books were left in the aisles! And again, these were grownups! There was an upside though--I got alot of practice with the Dewey Decimal System!

Scott, I hear you. I've met a lot of people intimidated by the Dewey Decimal System. And it's not that hard! Seriously, people, it's just sequences of numbers. It's like once that point is put in there people's brains shut down. And I'm telling you, those are the same people who will complain that the schools aren't teaching their kids.

The comments to this entry are closed.