Explosive forces and other matters

So last week was a bust. The type of bust that happens to bubbles where spit and other microscopic repercussions go flying. The kid came down with stomach flu last weekend, the extreme kind of stomach flu, and then me and Keen both got it in rapid succession.  It was ugly.

Last week was also a busy week.  There was the Science Fair, and a field trip, and I had a bunch of articles I was trying to get done.  I felt really badly about it but I had to pass on all the materials for the Science Fair to another parent even though it was my idea and I had said I would supervise and all that.  My (and my stomach's) bad.  I also bailed on the field trip, and the articles... well, I'm still working on those.

But let's talk science!  This year for the Science Fair Chance decided he wanted to ask some of his friends to do a group project. Boy, was that a mistake.  Picture three hyperactive boys whose main interests lie in wrestling, screaming, and running around, all of whom want to do volcanoes and have the attention span of gnats and you can pretty much imagine how our project went. *must not freak out!*

Luckily, volcanoes are not allowed so I suggested perhaps they might be interested in studying volcanic, or igneous, rocks - word of the day!  A nice fun age-appropriate topic.  Out of the four projects entered by first graders, three were scientific experiments, ours was a collection of rocks. 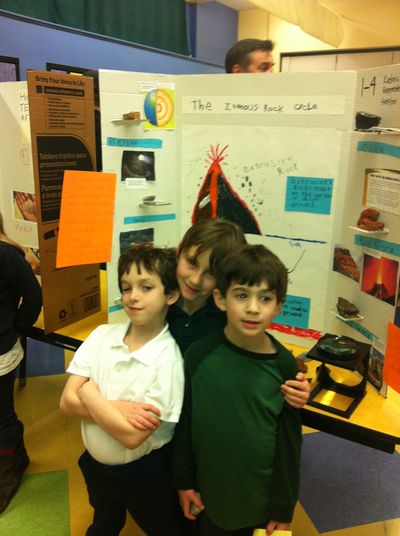 (Barely able to get them to hold still for a picture.) 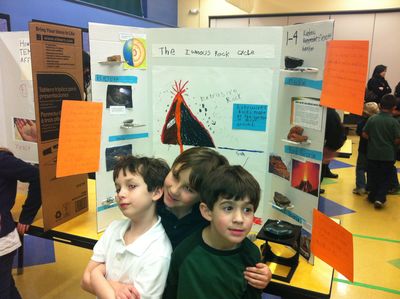 We came in fourth.  However, we the parents made sure they had fun, learned something, and did some actual work.  I'm not down with that whole "parents doing the project for them" deal.  (And in a town of engineers you see some doozies of "no way in hell a kid built that" experiments, but this year wasn't bad.) So despite some disappointment at the very end I think it went OK.

Besides, I think the boys' favorite part was the running around and screaming. Together.

Good for you! I don't like it when parents do all the work either - it's cheating the kids out of learning. Which is the point, right?

I saw a massive, homemade volcano at a fraternity party once--and it was quite amazing. No volcanoes for them yet, but perhaps in college?

We lit stuff on FIRE for our science project. Then we cobbled it all together to discuss the flammability of different fabrics yada, yada, yada.
But most importantly - we lit stuff ON FIRE.