Home Archives Profile Subscribe
It's not domestic bliss, it's domestic boredom
Blame the Internet! A meme

Every year I decide to do a bunch of Halloween activities. Actually, some of them I don't choose - there is always the school party and parade, and a yearly Trick or Treat function at my husband's office. But other activities I fully admit I get my own butt into.  Decorating the entire front of the house in whatever vintagey theme we've come up with, carving a gazillion pumpkins, offering to host trick or treaters, and this year we're having some of Chance's classmates over for a pre-Halloween party.  I jump into this season full of enthusiasm, with my eyes wide open.

Every year, apparently, as informed by my friends, at the end of it I say, "Next year I'm not having a party!"  Then my friends point and laugh.

But I do remember why we do it. It's because of the kids and memories full of shrieks. (Of laughter, not terror. Geez, I'm not mean.  Just a little Halloween crazy.)

Best buddies. Both in law enforcement. Sort of. 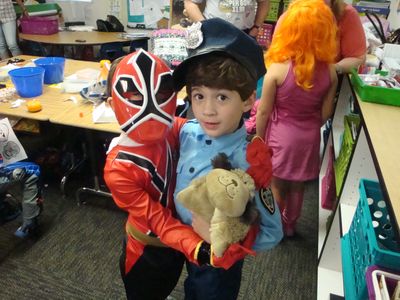 Chance decided that since he was a cop he'd better direct traffic for the parade. And pick his underwear out of his butt. I'm not sure those kids are buying his authority. 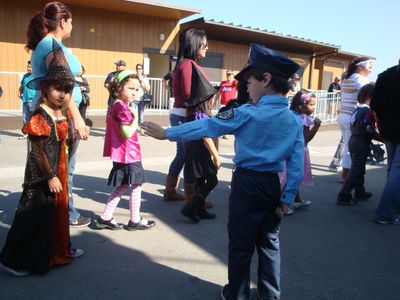 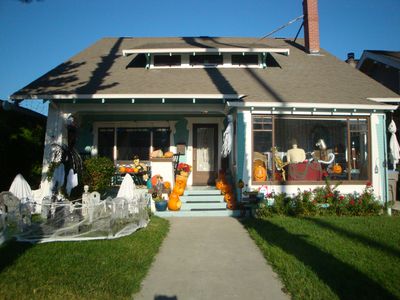 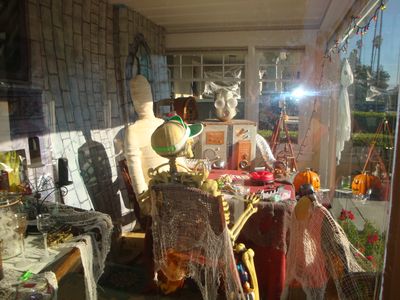 So check it out... Keen's dad brought us a box of caramel apples from the produce market.  Now we made homemade caramels apples this year and they taste about a million times better than these pre-packaged deals, so Keen decided he would just give away the packaged caramel apples to trick or treaters.  Remember when you were a kid and there were always the rumors about that one house* that gave away full sized candy bars?  You'd hike through hell and high water for that extra generous portion.  Well we're already known for the decorations, now we're going to become that house.

*Locally, that's what people said about MC Hammer's house. But as far as anyone could confirm he gave away fun size, just like everyone else.

Alas, we get WAY too many kids out here to do something that cool. Beats candy.