On socks and shoes and little boys

Thank you to Crocs for sponsoring this blog post. Please click here to learn more about Crocs’ new Back to School line. They've got 13 new styles for boys and girls (K-8) that are approved and ready to be worn at school.  I think I salivated a little when I found out about them, but more on that later.  I was selected for this sponsorship by the Clever Girls Collective. All opinions expressed here are my own.

I used to have knee-jerk anxiety when it came to back-to-school shopping (and I still do a little).  Since Chance has sensory processing disorder (SPD), and many kids with sensory issues are particular about clothes, I was worried about having a school uniform.  I worried that everything would be so uncomfortable it would affect how he functioned in school.  Well, with kindergarten now behind us and except for a couple of specific things, it turned out alright.  But last year, amid learning numbers and routines and the introduction of young minds to the school environment, I also learned a couple of new things about school uniforms...

1.  White shirts look SO CUTE the first day of school. The other 179 days, not so much. However, the layering of stains can be quite intriguing.

2. It is really, really difficult to patch the knees of pants that have the leg-width equivalent of toothpicks.  I am already sewing challenged, I don't need this grief.

3. White socks will become dingy socks. Not just dingy, though. There'll also be this dark grey circular stain right on the top of the sock, in between the top of the shoe and the hem of the pants.  It's like the boys decided it would be fun to drag the tops of their feet through mud every day. I don't even know how you bend to achieve that but the socks don't lie.

So this year I changed my whole back-to-school shopping strategy. Chance has the option of wearing either white or dark green shirts as part of his uniform, along with navy blue pants. This year I was going for dark green polos, pants with reinforced knees, and navy socks.  Of course, everyone else who had kids older than kindergarten had the same idea.  You know how the local department stores will stock school clothes in the colors of the neighborhood schools?  Oh my god, it was a fricking mob run on those green shirts!  Like they were the Christmas It toy!  But I got 'em. I am nothing if not a persistent shopper. The sad thing is I actually started my shopping a little early this year and the clothes were already going fast!  The pants (also running low) were solved by snagging one pair at the store, making sure they fit, then ordering the rest online. Sweet.

My one hiccup was the one I didn't expect.  I could not for the life of me find navy blue socks for boys!  It was ridiculous!  All the usual department stores only carried white or black. I mean, in what world would a little boy need to wear black socks that often?  Because we all know it's SO STYLING to wear black socks with sandals or jeans!  Maybe they had some grey socks, or the occasional red railroad track socks.  What?  I ordered some blue socks from a uniform website and they ended up being too big.

Here's the thing, we have been lucky that Chance's sensitivities to clothing have been minor.  I still look for softer clothing, tagless shirts, etc, because who doesn't want to be comfortable?  He'd love to wear fleece or sweatpants all year long, but he's OK with softer jeans or twill pants (like his uniform), especially if he's worn them in a bit.  BUT!  If his socks don't fit right, like they slip around because they're a little too big or they bunch up anyplace, he won't wear them.  It's a sensory thing that drives him nuts and I really can't blame him for that.

I finally found some navy socks by going to one of those children's stores in the mall that carry socks in every color imaginable. I was a little worried that I'd have to buy girls' socks but I figure if they didn't have fluted edges and I didn't tell him they were girls' that it'd be OK.  (Yeah, I'm that mom.)  But luckily they had standard gender-neutral blue socks.

That brings us to shoes.  Chance likes shoes.  (He's so my kid.)  He'll pick out the colors and patterns that he likes and he always wants more than one pair so he has options to change them with his outfits.  Then he tells us proudly how "stylish" he looks.  We had actually done our shoe shopping pretty early in the summer because his shoes from last year were completely trashed and barely fit.  But Chance loves Crocs and that's pretty much all he wears all summer.  He especially likes to wear two different color Crocs, like one red and one blue.  That's part of his styling look, you know.  Anyway, school started and he had problems transitioning to his school shoes.  He kept clumping around and tripping and I thought he was being silly and kept telling him to "stop walking like that" before it occurred to me that it was the shoes.  By this time, I had already heard and gotten excited about the new Crocs line.  If your kid likes something that much and it's functional it's hard not to want it for them.  Previous to this Keen and I had discussed trying to find him a pair of Crocs that looked more like regular shoes but they hadn't come out with anything that was quite right yet.  Then, given his difficulty with the other shoes, it all turned out to be a happy coincidence when the school line popped up. So I made some calls and found the nearest Crocs store that had the back to school line.

That kiosk also happened to be right outside Build-A-Bear. (Sucker mom!)

He loved them immediately (can't you tell?) and insisted on wearing them out of the store.  (Then proceeding to the dirtiest spot he could find before he would let me take a picture.)  What's cool about them is that they are so light he's not clumping around or tripping anymore.  In fact, as soon as he put them on he ran circles around the mall.  And he says they feel like Crocs on the inside but they still work well with socks.  What's an extra bonus for us is that with his SPD he's already trying to deal with too much stimuli and sometimes dyspraxia (clumsiness) kicks in.  This was exacerbated by the heavier shoes and I was just momentarily too dingy to clue in.  With lighter shoes it's just takes away one more potential distraction or difficulty he has to deal with at school and I'm really happy about that.  I thought the styles were pretty darn cute, too.  Here's his shoe... 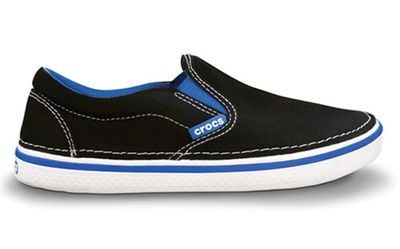 Crocs sent over this cute video with an easter egg when you spot this little guy.   --->

They are also holding a giveaway for a free family trip to San Diego, no purchase necessary!  So if you haven't gotten your vacay on this might be a fun option.  Enjoy!       - wg

You're a very fortunate mom! I never liked shopping for shoes, or clothes of any kind (and still don't)--so my mom had to be extra patient with me!

That just seems... wrong. The shoes are cute, though!