Right before we left for vacation I was offered an opportunity to review the first season of the series Drop Dead Diva.  This is one of those shows I was always interested in but never got a chance to check out.  I think due to scheduling conflicts with other programs or one of my various (obviously short-lived) resolutions 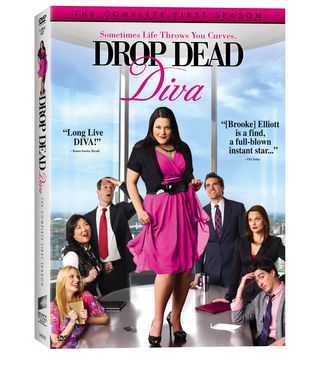 to stop watching so much television or something.

Anyway.  I've been watching the show since we got back and I really like it, mainly because Brooke Elliot, who plays the main character, Jane, is SO DAMN FUN to watch.  Since she's an early 20-something model trapped in the body of a lawyer she does a bit of that legally blonde thing... but a lot more charming.  It's a good formula to explore issues around weight, and body image stereotypes in general, without being heavy handed.  Since Keen has lost so much weight himself recently, and was a successful professional - who was heavy - for a long time, some of these same issues have come up in our own household.  It's nice to see a media outlet that is exploring how complicated the social aspects around body image and perception can be, not just treating weight as a black and white issue.

In general I think the program has a good deal of heart but balances it with some fun.  The only character that I'm not sure is working is the guardian angel, Fred.  I think he was supposed to offset Jane's insights about herself and be a prop to explore other relationships but he just comes off too much like a clueless college kid.  And it seems he has disappeared from season two so I guess the producers agree (??).

So anyway, I've watched a couple of preview shows of season two plus most of season one, which came out on DVD June 1st.  Drop Dead Diva's season two starts this Sunday and I'm definitely going to watch it over the summer.

I'm starting to like summer TV so much better than the rest of the year (Burn Notice, Royal Pains, Psych).  There's just something about the "off season" programming that I find more interesting.  Maybe the producers are willing to take more risks in summer.  Maybe it's more about entertainment and less about heavy drama.  Whatever it is, I like it.

What are you watching?

Well you know I read and don't watch that much TV, but I did watch Drop Dead Diva last season and I loved that show. I am so happy to see a new season and will certainly be watching. Love Jeffrey Donovan and watch Burn Notice when I remember to. Probably the only person in the world that LOVED Touching Evil with him. Was sorry that never caught on.