What's in your basket?

So we've told Chance that when little kids don't behave, the Easter Bunny fills their eggs with bunny farts.  I extended it to a few pellets if you're really bad, but the bunny farts are what seem to have impressed him.   An egg filled with farts is by far worse than an empty egg... and yet, it's still a little intriguing.

Chance has actually been pretty good lately, but we feel it's a wise parenting strategy to extend the same principals of Christmas ("We're calling Santa!") throughout the rest of the year.  It works great when you're approaching vacations, and of course Halloween's a natural.  I'm not real sure how we'll play that around Fourth of July - he's not a huge fan of the fireworks just yet - but it'll probably have something to do with explosions.  Any suggestions?  We do have a local parade... maybe I could work civic duty in there somehow.  "If you don't behave you have to ride with the politicians!"

That probably won't seem as horrifying to him as to the rest of us. 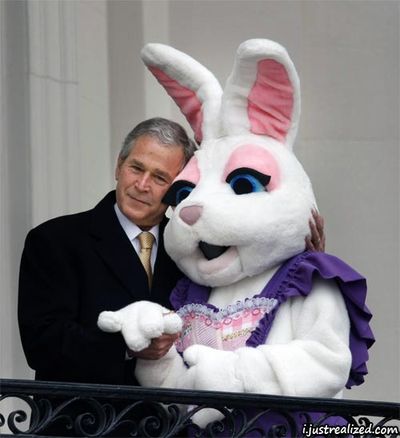 I think the dress on teh easter bunny is the scariest part. I think the ex-first lady should be worried.

Want to let you know, I've left you an award on my site!

When I was babysitting my brother once he was out of control and so I told him I'd call Santa and tell him not to bring anything. He kept up so I dialed the local time and temperature recording and had a fake chat with Santa. It kinda traumatized the kid. I was a mean, mean big sister. But the rest of the night was easier.

That is absolutely hilarious! But I thought eggs were full of farts already--they smell that way!