So I'm filling out (kill me) enrollment forms for Chance's kindergarten (gah! kill me) and I've hit a stumper.

On every single school form I have ever filled out for myself, and now for my child, under Ethnicity (which is different than Race, mind you) there is always a listing for...

Emphasis on the Not there, did you see that?  Sometimes there is even more than one listing of Hispanic/Latino or NOT Hispanic/Latino, just to make sure that we all know that you cannot be partly Hispanic.  Of course, the issue is that I'm 1/2 Hispanic and 1/2 White... but you can only mark ONE!  For me, in the past I often took the easy route and put Hispanic since I'm fully half that and I'm about eight different European nationalities on the other side.  Or on a perverse day I would mark White, cross out the "not", and then also mark Hispanic because really, who do they think they are?!

Of course, Ethnicity is supposed to mean the ethnic culture of which the child most "closely identifies".  Dude, we're talking about 5-year-olds.  And guess what?  I identify with Hispanic culture AND White culture.  Not that I'm altogether sure what "White" culture is supposed to be... for me it seemed to involve hearing a lot of Irish folk music growing up and not being allowed to drink soda.  Does that count?

And then under Race, they list American Indian/Alaskan Native, African American, White, and 15 different Asian designations.  No Hispanic.  No Other.  No Indian or Middle Eastern for that matter.  But at least you can choose up to five categories of what they've given you!  Ooooh.

So, besides getting irritated, I started freaking out a little (just a little) because if these stupid, inaccurate forms have been the bane of my school career what the heck would I put for Chance?!  But then I started thinking... Keen is 1/2 Italian, and 1/4 each German and Irish.  That makes Chance 1/4 Hispanic, 1/4 Italian, 1/8 German and Irish, and 1/16 of the about eight different things floating around in my DNA... that pretty much makes Chance a wash of European heritage.  I.e. White.

Regardless of what I may have identified with, regardless of his extended family.  Regardless that I had to, at times, kind of fight for my cultural identity because I'm paler than pale and who ever heard of a red-headed Hispanic?  (Everyone discounts Charro.)

The important thing here is that you check off the box from the options they've given you, right?

Thank you, forms, for chipping away at my cultural heritage. 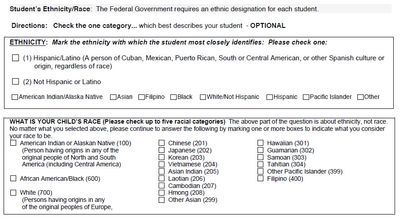 Why do you protest? We should all fit in those uniform little boxes. All of us. So he must be white because you say so. Everyone can treat him that way now.

Those forms are such crap. But you start putting Hispanic down now. Believe me when it comes to college, La Raza all the way baby. Not to mention the scholarship ops! I have always marked two or more boxes for my kids: American Indian, Hispanic and White. They are all those things. Screw anyone trying to make them fit into one box.

That's the thing--it shouldn't matter! I realize this nation, despite its ideal of equality for all, has always been rife with ethnic and racial tensions--and that every new immigrant group has been despised (as well as the original immigrant group, the Native Americans). But how is any of this different from "Colored" facilities and "White" facilities of the past? It's not. There is every bit as much prejudice and discrimination in this country as ever--it's just toward different groups. Now it's white men (Hispanic and "Not Hispanic") who get the brunt of it most.