Monday Monday, so vague to me

I am having difficulty organizing my brain.  This seems to occur monthly, with blood loss.  (Who knew endometrial lining contained so many brain cells?)  Today's dump will include some synopsis or other of events that have actually occurred in real life.  (Because even though I have this life blog I kind of don't feel like it's always representative of my life.)  In a nutshell, recently it has been raining, Chance was sick, then better, ditto Keen, we made a trip to Yosemite, got completely rained/snowed out, came home early, Keen took Chance to the aquarium, it was still raining, I went to the first of the Kindergarten Information Nights (ack!), total downpour, parked in the wrong lot, sat wet in cold auditorium, did a bunch of errands as a family, still raining, and Chance is sick again. So the lesson here is... attempts to have a life = bored, sick, rainy day child.  Who, by the way, only wants to talk to me when I'm on the phone or the computer.

Attention: that will be a new rule in our house, if Mommy is on the phone/computer, don't talk to her!  I don't bug you guys when you're zombieing out on Wii, do I?  No.  I throw you chips so you won't eat my brain.

So we've had this Giant Book of 1000+ Sudoku for well over a year. It starts off at Easy puzzles and goes through to Extreme and it sits in the bathroom and every time I have to tinkle (or just hide somewhere) I work on a puzzle.  Since I've had a child and my bladder also only wants to talk to me when I'm on the phone or the computer you can imagine this is quite often.  In fact I'm putting it on my resume.  That should guarantee I won't get hired anywhere, ever.  Anywho, I am pretty much through all the puzzles except for the Extreme's (and a few random Easy's that Keen and I save for when we want to feel like we're doing something but don't really want to think about it (completely bathroom redundant but whatever)).  Well, some of these Extremes are fairly - I'm not gonna say extreme because really? NOT an X game - but they are hard.  And I tend to stare at them with furrowed brow to greater or lesser results and on a few of them I had to give up and move on to a new one.  And then it BOTHERS me!  Not that I didn't solve the puzzle but that it was left incomplete!  I can hear those squares buzzing their annoying empty sound.  (Also, guessing on a puzzle?  Seriously works the nerves.)

So as I mentioned before I am having a couple of particularly bad brain days, but of course I can't quit the Sudoku.  Well, it finally occurred to me... after a year... that there are ANSWERS in the back of the book!  If I'm really stuck I can sneak a peek, stick in that random number, and continue.

Obviously the cheating is less worrisome than the empty brain buzzing.

Which, now that I think about it kind of reminds me of rain.

If any of you were wondering what living with a sensory-seeking SPD kid is like, it's kind of like this... 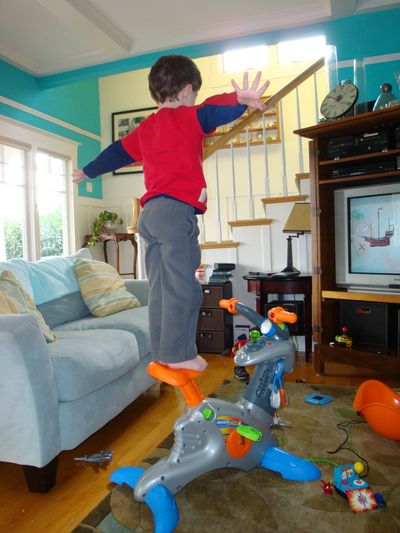 Followed by launching himself into the couch, over and over.  (I've heard that there are little boys who don't do things like this, but I've never personally met any.  Me and my brothers used to do this type of stuff all the time.  Geez, runs in the family much?)

Actually, that balancing right there?  That's something of a breakthrough.  For a long time Chance's balance wasn't very good.  It's part of the SPD (dyspraxia/postural instability).  Fortunately, he didn't (doesn't) have as much of the fear as a lot of kids with sensory-related balance issues do, so he'd still try things, most of the time.  Sometimes not.

He still trips and falls down a bunch, but I think some of the time he's doing it on purpose. He REALLY likes to roll around on the floor.

You can imagine my angst when he does it in a public bathroom... at the doctor's office... during flu season.

So on the one hand, super proud of my burgeoning gymnast!

On the other hand... he's got pink eye again. 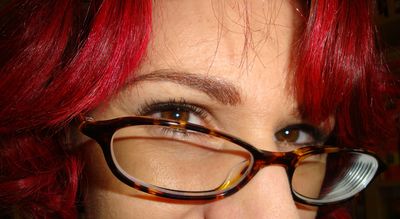 Alternative is another name for options

This video makes me feel a bit queasy.

It's about diagnosing children with bipolar disorder and medicating them.  Not that I'm against medication, because I'm not.  I have a close friend who is bipolar and I knew her before she presented symptoms, after she was diagnosed, and I've seen her both on and off meds.  She absolutely needs them.  There are lots of people, even children, who need some type of medication or other to help them function.

But feeding multiple pills to four-year-olds when diagnosing seems like "an experiment"... ugh... it just hits me in the gut.  Especially when you see professionals admitting that children can often be misdiagnosed.

The part I really have a problem with is the portion (I'll summarize for those who don't want to watch) where a mom is asking her 4-year-old child's psychiatrist if there any other options outside of medication, such as therapy, to help her child and the psychiatrist says "No".

There are other options. You can get a second opinion.  You can see a panel of specialists, not just one person from one field of study.  There are different types of therapies.

OT (occupational therapy) has done wonderful things for Chance.  It has also been wonderful for another classmate of Chance's who goes to the same center.  Now granted, neither of these little boys have bipolar disorder; they both have sensory processing issues.  But OT can be helpful for a variety of issues, including mood disorders.  It is an option and one that I don't think is very well-known.

I also have no doubt that if we had "just waited" like so many people suggested, if I had not pushed for Chance's assessments to find out exactly what was going on, if I had not tried the OT (out of pocket I might add), at some point someone in a school somewhere would have told me Chance was ADHD and needed to be put on medication.

So far the OTs and speech therapists that Chance sees are seeing no signs of ADHD.  It's all sensory processing disorder (SPD).

My brother was put on Ritalin when he was kid and it never seemed to do much for him.  Then as soon as he became a teenager they kept offering him different forms of antidepressants.  Looking back at everything, I think he had sensory issues and was misdiagnosed, first as ADHD, and then it was just assumed he was depressed.  (Not that depression doesn't run in my family, because it does, but not ALL of us are depressed.  I've been offered antidepressants multiple times. I'm NOT depressed.  My complaints?  Tired and having back pain.  Solution, here's an antidepressant. ??)

What's my point?  I don't know.  I have such mixed feelings about the entire medication and instant diagnoses process.  It's so complicated.  And again, I've known people who've done great on meds and needed them.  But I also personally feel there is an age that is "too young" to give drugs to little kids.  I'm not even sure we know how those drugs affect teenagers' development.

I DO think that starting with something that doesn't use drugs, like OT, is a better first step than going instantly to medication.

I want to talk about SPD here more this year than I have.  I meant to but I always ended up discarding those posts.  However, I'm going to change that.  It seems like SPD is so unknown and yet you see it, once you know the signs, all the time.  And I feel like if I help talk about it maybe it can help other parents know their options so their kids don't get ignored or misdiagnosed.

Honestly, I'd love it if a few of us parents dealing with SPD got us a website going.  Talking parent to parent, you know?

like packing up and moving to a new town

I am almost done transferring everything over to my new computer.  (I bought a Sony Vaio FW series and so far I really like it. It feels nice.)  Because I'm on Windows 7 instead of XP I can't figure out how to import bookmarks.  I also haven't migrated over my mail yet.  And you know what?  I don't think I'm going to.

I've been migrating all my mail for the last several jobs and years.  Because that was Responsible.  Just like making all those backup files is Responsible.  And I admit, I am something of a pack rat.  I still have letters from people, cards, notes written in highschool, forlorn diary entries scribbled on the backs of math homework. Those are memories to me.  I'm not sure email constitutes the same kind of correspondence.

Sure, there are some that are meaningful.  But last I checked I had something like 18,000 emails, mostly from jobs, that I've been schlepping around.  That's some heavy email.  But the Responsible thing would be to keep those Just In Case.

I'm done with Just In Case.  I want a fresh start, like packing it in and moving to a new city out of the blue.  (Which I've never done, by the way.)

There are about 300 emails that are meaningful or important right now.  Like my writing group, emails about Chance, current projects and plans.  Oh yeah, important login info.  I'm taking those with me.  Even if I have to forward them manually.

Everything else can sit in backup.

- the weird "a tiny bit less of a hoarder" girl

the melodrama of machines

So I don't DO resolutions.  It's just not a system I support.  (At least for New Year's, The rest of the year it's fine. Change... woo!)  But I've still managed to break one!  Because I was all, "OMG, after the holidays I'm SO gonna write more. I've got all these pictures to post and I'm gonna visit my blog peeps.  And OMG, computer, we can hang again and totally stay up all night  and it'll be so much fun!  I've missed you!  You're my BFF!!"  Fully expecting my computer to come back with, "OMG, I've missed you too!  Let's never stay apart again!  Hugs!!"

But you know what my computer actually said? It said nothing.

Or maybe it's trying to say something but it's so fucking slow I can't hear it.

I knew my computer was having issues but it wasn't until I walked into a Best Buy that I realized how slow it's gotten. In comparison to the new models my computer is basically a brick.

As we speak I'm typing on my son's netbook (he got it for christmas because we knew the other computer(s) were failing) because on MY computer I'm searching for a photo that someone asked for and it's taking a full five minutes for each folder to open out of My Pictures.  My email was taking up to 15 minutes to download email.  You know, if it didn't give up. Or lock and freeze.

So I'm getting a new computer.  Hopefully, today.  And I apologize for all the bitching.  The new year so far has been pretty good!  I'm actually hopeful!  And in a good mood!  Especially after I get a working machine. And my old makeup.