Yet another way I've corrupted my husband. Bwa ha ha!

I just wanted to laugh like that.  In fact, I think I will be laughing like that all week. Gotta get my cackle on.

So, as usual we've gone a little overboard with the whole Halloween decorating thing.  But it is so much fun!!  We went with a mad scientist theme in the sunroom this year. 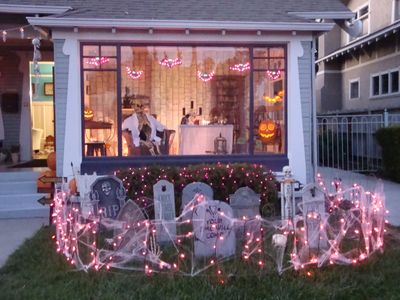 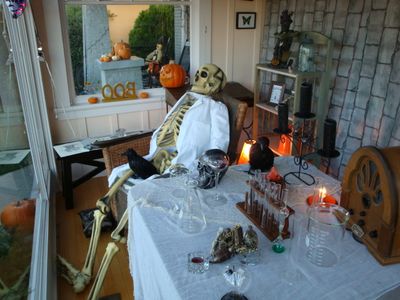 We'll be adding in lots of candles and bubbling liquids in those beakers come Saturday night. 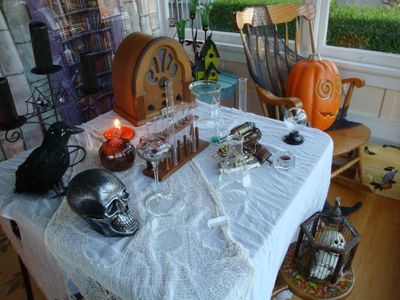 So that was ONE side of the yard.  Then Keen whipped up these ghosties and trees for the other side.  (It's hard to see but he made one green lit, one orange, and one purple ghost each.) 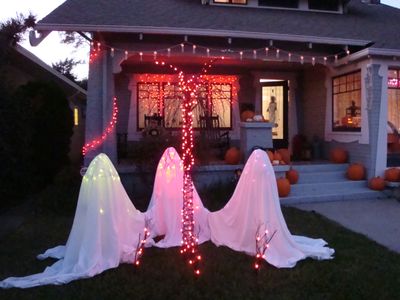 He also has an elaborate lighting and fog machine setup ready to go for Halloween night.  Keen is quite good with the lights.  This all is evidence of my awesome corrupting power!  See, he used to be ALL ABOUT Christmas.  And really, Christmas around this joint is pretty disgusting, too.  It's all candy canes and light up cute.  But the fact that Keen has so obviously embraced the Halloween vibe is entirely due to my evil influence.  He MADE those ghosts!  Hands-on!  (Usually, if something needs to be built that's my arena.)  And he even bought a gruesome accessory or two.

Not cute, not cute at all.

You know what I love?  Going to the doctor for, say... oh anything, and getting tested for sexually transmitted diseases.

What are your symptoms?  Oh, you say you're tired?  OK, Trampy McTramp, here's your bloodwork slip and try not to touch anything on the way out.

So a big life change that has just happened is... (drum roll)... I've left my job.  I really liked the people I worked with and I hope to work with them again in the future.  But the job was fairly demanding and I felt like I was being pulled in way too many directions and doing none of them well.  The stress/time management issues were outweighing the moolah, especially considering after such a big chunk went to self-employment taxes.

Not only have I left my job but we made the decision that I would take some time off for a while, too. Time to concentrate on family and other things, writing being one of them.

This is kind of huge for me because I've never not worked.  (Well, except for when I was pregnant and was so ill I actually had to quit a job that I had just gotten.  That still bugs me.)  I've worked part-time for the last few years, but even then it was always work part-time AND go to school, work at night AND raise a kid.  Before I had Chance I was working start-up hours and at times, held two jobs.

I admit to floundering around a bit those first few days after the work stopped. Didn't know what to do with myself.

(And who am I kidding? I'll probably still end up taking side projects. Type A is an addiction.)

Anyway, I figured maybe I would start to feel a little less tired what with my new lifestyle of bon-bons and leisurely pursuits.  Right?  Nope, still totally tired.  I had my visit with the rheumatologist this week, checking on arthritis and general decrepitude.  There could be some type of arthritis starting, it could be fibromyalgia... oh, and it could also be hepa-fricking-titus b, you dirty little girl.

OK. Without revealing too many intimate details, my sex life has been WAY less interesting than warrants the number of STD tests I've been given.

Stubbed your toe?  Let's give you a gonorrhea test.  Sore throat.  Let's HIV that sucker.

And I know the doctors are trying to be nice but it doesn't make things any easier when they (always!) try to gently explain, "You know sometimes things happen with just that ONE night..."

Yeah, haven't had any one-nighters.

- the weird "no risk factors" girl

P.S. No offense to any Hep-B positive people out there.  I know it's not always about sex or needles.

The candles are all lit

The first big storm of the season just blew in and it's raging out there.  I already had to get drippy because my dear husband (are you reading this, Keen?) didn't take any of the outside furniture cushions into the garage.  Dude.  Anyway, I'm typing quickly before the power goes out.  Our last house was cool because we shared a grid with a hospital or politicians' offices or something else important so we rarely ever lost power.  Even rolling blackouts didn't touch us.  Here... one small mile over... not so much.

Lately, I have felt the world conspiring against me every time I go to blog.  First it was lots of work.  Last week our modem died.  Then my account got suspended for an expired credit card (whoops!  Really. My credit is good).  After a while it knocks you off your blogging groove.  Actually, I've kind of felt like the last year has knocked me off my blog groove (or bloove, as I like to call it).  I'm working on getting back my funny/interesting.  Or one can hope.

In the meantime you get blurbs of meaninglessness.  Yay!  Existential examples in an easily digestible format!  With alliteration.

I'm going to go ahead and push publish now before I lose this gem.

OK, I'm back!  So what else have we done lately?  Oh, we went to see the Star Wars Concert.  You know, that's where they have the full orchestra playing all the music?  And they also show movie clips on a big screen and have a laser light show with it.  AND they had C-3PO hosting.  It was totally cultural and nerdy at the same time.  AWESOME!  I mean, how often do you get to go to a classical concert dressed up as a storm trooper?  (Not that that was me.)  But I would fully recommend this concert.  We took Chance to it and even though there was a little anxiety with the noise at first (those SPD issues), he adapted really well. Especially after the first few movie clip explosions and lightsaber fights.  That's like 4-year-old heaven.

We also have started decking the house out in Halloween decor.  I'm dressing the sunroom up as a mad scientists' lab this year.  Suddenly, I'm feeling in the mood for zombies, and monsters, and vampires, oh my.

Am I the only one who has noticed that PBS keeps using that Vampire Weekend song in between their kids' shows?

I think I'll just keep adding to this post periodically. It's one of those days.

Ok, can't say I'm pleased with this iPhone app. I have lost all network connection. Can't figure out the problem yet and, really? Didnot feel like playing IT maven today. I'd really like technology tojust fucking work, thank you. How lame is it that I am sitting on my bathroom floor typing onmy phone? I am not a good texter.

Though, don't get me wrong, phone, I have realized that you are my one true love. I can't believe I wasted all those years with a human guy when I could have had you.

What? I can manage two guys.

Also, I have been trying to send out an Evite since Monday . Fucking system crashes every time I go to send. So... for those of you who know who you are... Yes we will be having the party. I might have to call you.

You know, I just REfUSE to type in that short hand emoti gobbledygook!
- wg