Home Archives Profile Subscribe
But those clothes are still Perfectly Good!
The unveiling

Contest for a Monday morning

This is our new frog. 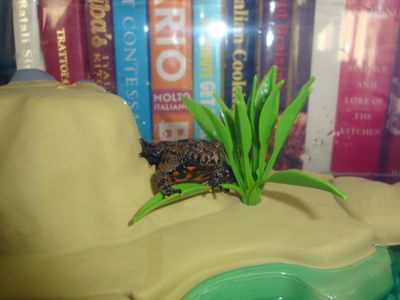 An Oriental Fire-bellied toad, to be exact.  Chance was given a "frog house" for his birthday so of course he got very excited about the frog he would soon have.  It was a given.  He had a frog house - quite publicly presented and cooed over with much encouragement from the witnesses - so of course he would need a frog to fill it.  That was part of the gift!  Duh, mom and dad.

We now are a household of two cats, four goldfish, and a frog.  Plus people.  And one empty aquarium, which makes me a bit nervous.  But don't worry, that one has been hidden for quite some time because of the above scenario.  I think it's one of the laws of physics that an empty tank must contain some sort of  living creature or Schrodinger's cat dies or something.  At least, that principal kicks in if the said empty tank is viewed by children.  It's all very quantum leap.

I'm also a little nervous about this tank. 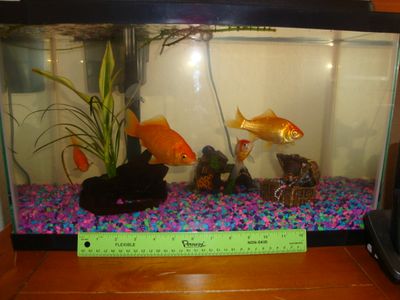 Do you see how big those fish are getting?!  That aquarium is already way too small for them.  I know because I have to clean it all the fricking time.  We got those fish last summer.  They were all about an inch long.  A petite inch.  Except for the big one, he was about an inch and a half.  (I'd call him a monster but he'll come eat out of my hand.  Awww!)  I predict another feline-lethal tank will soon be gracing the shelves of our garage.  (I'm not getting rid of them, just upgrading their home.)

OK, so here's the contest... guess the name of the frog!  Go ahead throw out your best guesses!  Please keep in mind it was named by a four-year-old.

If you want to guess the names of the fish (yes, Chance named all the fish, too) knock yourself out.

I admit, I kind of like the frog.  He'll get along nicely with the lizard we'll eventually have.
- the weirdgirl

First, what kind of mutant strain of goldfish did you get that you still have them living AND growing in your house this long?! I didn't think that was feasibly possible!

Frog...gah...you are a good mom. They creep me the hell out. I am a bad name guesser. I will toss out Frodo.

I'll bet on either "Froggy" or "Hoppy" for the frog and "Orangy" for the fish. That or one of them is named "Fred".

Mr. Toad is a nice name (from the Wind in the Willows)

Jasmine, it has to be Jasmine, because you know....JASMINE.

Those are all good guesses! But no one has hit the mark yet. I'll unveil froggy's name tomorrow. (That'll give me time to figure out what else I'm writing about.)

FADKOG - Those are super tough, survivor fish, is what! Did you know that goldfish can get up to 10 inches and live for years? Yeah, all my previous goldfish died before they got to two inches. (P.S. Frodo? I'm nerdy but not quite into naming anything after hobbits yet.)

Joy - Very close! At least for the fish.

Kim - Me too! And I would be cool with Kermit.

Musing - My son just isn't as well read as the rest of you. But if we had read Wind in the Willows he probably would have gone with Mr. Toad.

Godmother - Wouldn't Jazzy be pissed if that were true?

Maya - My son is surprising in his name choices. Sometimes they're really obvious and other times they're just out of the blue. Such as the dump truck he named Dave, and the girl cat (stuffed) he named Hockey. (??)

I always have trouble with these guessing games. So, I'll just take a wild guess....the frog's name is...Ted.