Because I'm so much older than three... Barbie, Feminism, and why it's good to be a kid (still)

As I was staring at a whole aisle of Barbie products, shopping for an upcoming birthday party, I realized that, whereas I know the whole princess phase starts kicking in about now, I have no idea where three-year-old girls are at developmentally. For example, do three-year-olds want the big doll whose hair they can brush? Or do they want the smaller dolls that are so cute with the snap on outfits? Do they want to dress the dolls yet? Or just walk them up and down their imaginary castles? Are they into the big sister/little sister role model combo? Or are they identifying with… what?

I have a boy, see. If I was shopping for my son I’d immediately go for the smaller versions that came as a set and could be play acted in a variety of scenes, plus fit into really small spaces or easily hung from string, balanced on small cars, survive falls from high places, etc.

I had to accost some poor man, who I overheard on his phone discussing which dolls his daughter already had, (yes, I totally eavesdropped) to ask questions about what little three-year-old girls were doing with dolls these days. (Went for the big doll for maximum dressing and hair styling potential, BTW.) Thank goodness he was there, because I was just sort of lost. I’m great with older girls, from about five all the way up to the teens (I’m the cool aunty). I know that I would have gone ape-shit for all the fairy and mermaid crap if they had that when I was a kid (not so much for the princesses, but I AM a scifi/fantasy nerdette (But still cool.)). But I just wasn’t sure how Barbie was playing on the three-year-old spectrum. And they have A LOT of products nowadays!

I really like Barbie, actually, though my true appreciation of her came after I was a kid. I did a whole paper on her in college; a feminist, post-Freudian analysis of her role as a signifier in our society. My basic theory was Barbie is the original and ultimate Woman because her psyche/sense of self wasn’t defined through a realization that she doesn’t have a penis.  Because Ken doesn’t have one. (Because, you know, that’s what Freud thought we were doing… defining ourselves through the lack… it’s tied up with that dumb penis envy theory!) Barbie was also truly the Other woman (in the literary sense of Other), and is simultaneously set apart yet also a source of incredible power in her non-Freudian, therefore self-defining femininity. See? OK, that was probably totally confusing, but it made sense in my paper. (And I got an A, because sometimes being a smartass, backed up with good research works out for you.)  Some tidbits from my research… #1 Barbie’s much maligned body proportions were made that way to compensate for the clothes – when you make clothes that small you get an interesting bulkiness in places. Once they adjusted her proportions the clothes looked more “normal” on her. #2 Barbie WAS designed based off a German sexy, joke doll!

I personally find Barbie’s long, evolving history, the early smarmy marketing tactics (more on that later if anyone wants to hear), the feminist/anti-feminist debates, the ongoing controversy she generates – even today with all the over-merchandised princess crap - to be all rather delicious.  Whether you like her or not no one can deny that Barbie has power!

However, my love for her as a child was much simpler: I loved the clothes. And the shoes! All those little slip-on mules!  Barbie was, in a nutshell, fabulous. However, my family was also kind of poor so I didn’t get many brand-new, Barbie clothes (or new clothes for myself, for that matter). Or I got the K-mart knock-off doll’s duds. Mainly, I made her little outfits myself from fabric remnants, which actually opened up vast vistas of fashion and make believe… my Barbie was an adventurer, a sky-diver as well as a pilot, always in some new place with a new skill; she could take on anything! As long as she could do it in coordinating tube tops and straight skirts (which were also tubes). Because that’s all I could sew. I did have a few snazzy scarves thrown in there as well.

So is it any wonder given my convoluted relationship with her that I, along with buying the birthday gift, ended up buying myself this: 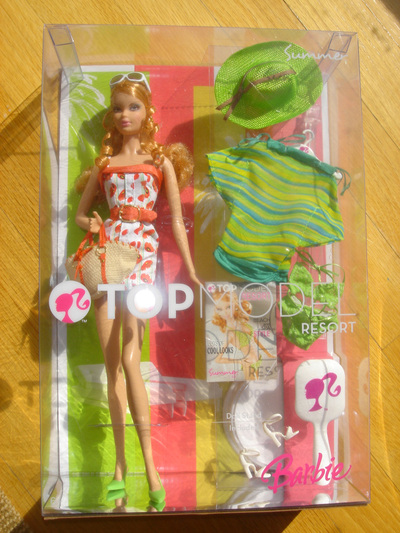 So fabulous! The highly fashionable clothes, the shoes, the retro, come-hither eyes that may just lure away all the men. A dangerous and seductive woman, powerful yet not trashy like a Bratz doll. AND a redhead to boot! (Well, strawberry blonde is close.) How could I resist? - wg

P.S. I also have a preggo Barbie with the detachable tummy. The one they banned from stores! Rockin’!

Addendum: because Creative-Type Dad made me think of this:

I used to (and might still have, somewhere) "Growing Up Skipper," the doll who grew breasts when you cranked her arm. I believe she was banned from store shelves, too.

When I was a kid, I made barbie clothes, too. Felt, usually, as it didn't need hemming. Or tissue for that hospital gown look.

I also loved Barbie, and didn't have much of the brand-name stuff because we couldn't afford it. Or I ended up with, like, Western Barbie or Workout Barbie because they were in the discount bin.

I loved her anyway. I wish my younger sister hadn't wrecked mine. I don't have any left.

Kathy - I'd love to have a Growing Up Skipper! The absurdity factor just rocks!

Creative-Type Dad - I think the whole Barbie family has some issues with... uh... their parts.

Hannah - yeah, mine were mainly knock-offs or really old ones from the 60s that got passed down. I think I only had one "true" Malibu-esqe Barbie, current to the times. (I should go dig up those old Barbies.)

I need to get my calculator out to see how much street-cred your just lost.

FYI, I'm pretty sure creative-type dad is right on that one. I saw Joe beating the crap out of that puss Ken...you know Joe just takes what he wants. USA!! USA!!

My three older sisters and I had a huge trunkful of Barbie stuff. Barbies, clothes, all sorts of stuff. We used to set up mansions for Barbie. Of course most of it was hand-me-downs from other people but I stil remember getting to pick out one new Barbie for birthdays and Christmas. Good times, good times.

I bought a mia hamm barbie after the 1999 world cup (on ebay)- and because I am mental, it's still in the box. the box which my soon to be 3 year old found and claimed his own. and i didn't for one second feel bad about prying his grubby little paws off my barbie!

I still have all my Barbies and will sometimes beg my sons to let me get them out and play with them when they get their WWE wrestlers out. Something. Anything. I just want to play Barbies, and I'm willing to roll out the beach bus and Barbie plane, too.

I love this take. I remember when Thalia turned about two writing about my little freak-out at her being introduced to the Barbies by an older girl Barbie PRINCESSES no less. She was not interested.

And if she's any indication, (and she's about to turn three), it doesn't matter whether the doll is sexy or cutesie as long as she can take its clothes off.

Actually, she'd rather have an animal. That's my girl.

Yes, Barbie clothes are indeed FAB-U-LOUS! Ever watch any of the Barbie movies? She's always a strong, forward thinking female character who takes care of herself and doesn't need to be saved by some guy (of course, she is always in love with some guy, but she's no damsel in distress).

I got my first Barbie when I was in my 40's. Yes, you read that right. Growing up, I was never into dolls. Well, OK, maybe one doll. I think her name was Chrissy and long hair grew out of a hole in her head.

I tried to make clothes for my first Barbie, but quit after I completed my ensemble because I HATED sewing all those tiny tiny pieces together.

I do own a 1968 Special Elvis collectors doll. Does he count as a sort of Barbie?

Definitely not ALL the men! Don't mean to burst your bubble, but Barbie is just a skeleton with skin!

Definitely not ALL the men! Don't mean to burst your bubble, but Barbie is just a skeleton with skin!