Home Archives Profile Subscribe
Are You a Yeller?
Mixed Messages

Eating too much pirate booty...

...because I've been cranky, that's why.  For reasons I will go into later.  I've been working SO HARD on reducing my stress, living healthier, blah blah blah, and then something comes along making me feel all anxious and tired.  Again, I'll go into it later.  And no, I'm not pregnant.  (damnit)  However, I thought the following were a lot of fun.

I saw this one over at Chag's and had to do it.  The rock band meme.  Here are the rules... 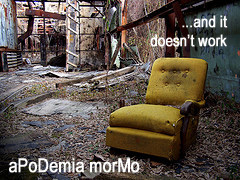 (Apodemia Mormo is latin for the Mormon Metalmark, a species of butterfly.  No, I'm not kidding, that's really what I got.  I figure with that one you could either go new age-y (blech!) or total deconstruction.  I vote deconstruction.  Maybe market PDM! for short?)

OK, and as for the second cheerer-uper... subculture nerd alert: I've been enamored with girl roller derby since leagues started popping up again.  SO cool!  (I think most people's reaction, upon meeting me for the first time, would be a little confused, but trust me... all the guys I grew up with would be like, "Roller derby?  That's SO you!")  A new league is trying to start up in my area and I would totally be interested in trying out/learning more/just being a groupie if it wasn't for time, money, and having a million other things on my plate.  I did just start drum lessons, after all.  Oh yeah, and trying to get pregnant.  Methinks roller derby and preggos don't mix.  But it is fun to dream and roller chicks have the coolest names ever!

So check out a roller derby name for yourself.  Here's mine.  (OK, it's way more fun, and creative, to come up with your own, but I'm into the mindless variety of entertainment tonight.)

If you decide to do either of these, drop me a line in comments.  I'd love to see your rock band/roller derby coolness!            - the weirdgirl

You are Elinore Brusevelt.. slow and steady..

And I totally dig roller derby too.

Hi Chag. I thought YOURS looked like a real album! Specifically, it reminded me of that Pearl Jam album with the camel on it. (Is that a camel?)